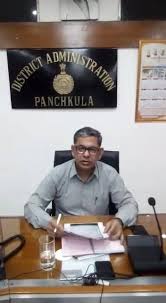 Deputy Commissioner, Mr Mukesh Kumar Ahuja directed the concerned officers to carry out a drive at village level for the collection and disposal of waste face masks and gloves. Under this drive, door-to-door collection of masks and gloves would be carried out once in a week.

Mr Ahuja gave these directions while presiding over a meeting regarding the management of waste COVID-19 face masks and gloves, here today. He said that proper and safe disposal of waste masks and gloves would not only prove to be beneficial for the health of villagers but also ensure cleanliness in the villages.

He directed that concerned BDPOs would ensure to provide polythene bags to safai karamcharis for collecting this waste. He said that the waste, after collection would be taken to the concerned CHCs and PHCs, from where it would be transported to Bagwali for its safe disposal. He said that proper ‘Munadi’ should be carried out in the villages so that villagers could come forward and actively contribute in this drive.

During the meeting, detailed discussion was also held regarding the registration of beneficiaries under Ayushman Bharat – Health Protection Scheme. Mr. Ahuja said that about 4000 families are yet to be registered under this scheme. He directed the officials concerned to make available village-wise list of these families to concerned CHCs and PHCs so that Golden Cards of such families could be prepared.

He said that for the registration of left out families under this scheme, a special campaign will be launched from March 1 to 15 under which camps will be organized at 72 different locations. The Deputy Commissioner said that the concerned BDPOs would contact prominent people of villages and ensure the registration of such families.

DDPO Mr Kunwar Daman Singh and Officers of Haryana Pollution Control Board (HPCB) and Health Department were also present in the meeting.