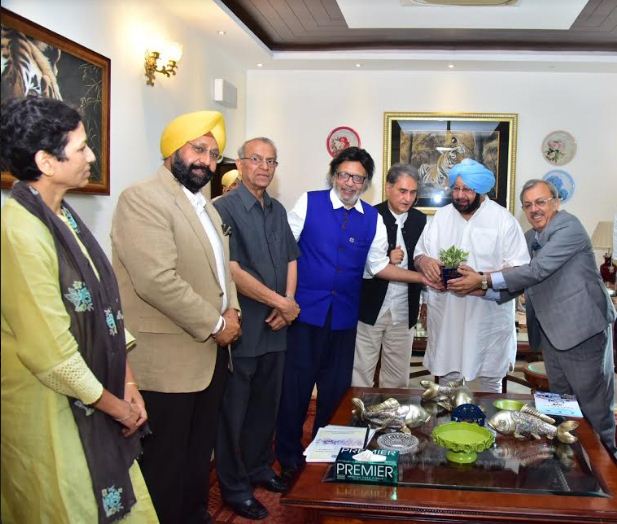 This event is in continuation to the Chamber working relentlessly over the decades for the socio-economic development of Indian States with a motto – ‘Strong States Make Strong Nation.’. The conclave wll e attended by Industry captains and investors who are engaged in their businesses in Punjab.

A delegation of PHD Chamber under the leadership of its President  Anil Khaitan today met Captain Amarinder Singh, the Chief Minister of Punjab to extend him the invitation for conclave. Mr.Khaitan appraised Chief Minister about the background and objectives of the conclave.

In its 15th edition this year, PHD Chamber aims to support for “Making New India” through strengthening the base for government-industry interface at states, by ensuring the best desired outcomes in these crucial thrust areas during the Conclave and further on through sustainable practices which includes Agro & Food Processing, Healthcare, Infrastructure, MSME, Renewable Energy, IT &ITeS, Auto & Engineering, Tourism, Textiles, Defence Manufacturing and Electronics System Design & Manufacturing (ESDM)

According to Anil Khaitan, President, PHD Chamber, “The Government of India (GoI) with its latest vision, mission and further goals and policies, is pushing forth the idea of a government which governs, facilitates and encourages the citizens from diverse stratums to participate in economic development activities. Such a vision necessitates innovative means to achieve the desired ends.

At the cusp of decisive change, if the collaborative efforts of government and industry could continue with the same momentum or increased pace, the next 25 years will end with making India a $20 trillion economy or even richer where the average Indian citizen would earn $7,100 or more.

“That is on track of attaining the goals figured out with “Making New India,” and the Conclave keeping the constructive bearing with the government and industry, spearheads the Campaign to transform the way India perceives governance.” Said Khaitan

A uniquely significant programme on government-industry interface in India, it upholds to ensure a robust eco-system for businesses, by simplifying the official procedures and making them transparent at decision-making levels, with greater interface of technology. Also, it proactively supports India’s “Economic Reforms Mission,” with bringing the highest echelons of government and industry at one powerful platform where who’s who of India makes their presence felt.

PHDCCI, established in 1905, is a proactive and dynamic multi-State apex organisation working at the grass-root level across States of India and develop strong national and international linkages. Through policy interventions, it acts as a catalyst in the promotion of industry, trade and entrepreneurship.

This Council, since its inception has been working towards a shared vision of priorities. It strives hard to create a knowledge, innovation and entrepreneurial support system through a collaborative group of experts, practitioners, partners, diplomatic community, members of civil society, chambers with diverse accreditation and media to pursue the developmental agenda for states and accelerate its implementation on ground.

Jordan Sandhu and Payal Rajput will be seen in Punjabi Film, “Hanji Hanji...
Scroll to top