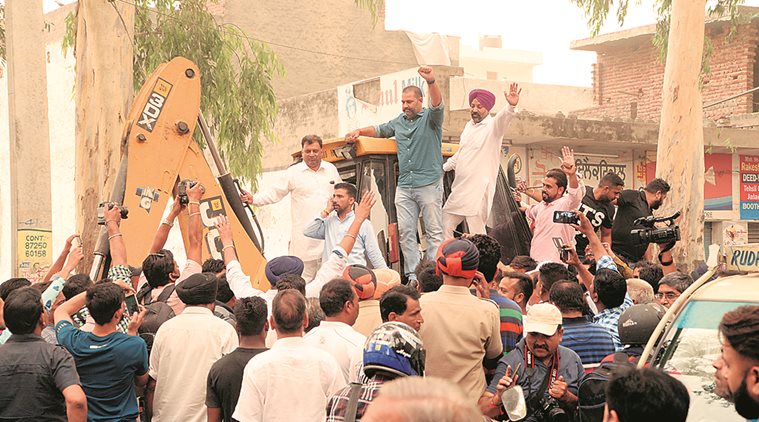 At least two senior Congress leaders in Punjab have openly opposed their own minister Navjot Singh Sidhu’s drive against illegal colonies in Jalandhar .

Congress MLA Sushil Rinku on Friday climbed atop a bulldozer and stopped a team of Jalandhar municipal corporation  officials from going ahead with demolish of an illegal colony on Kala Sanghian Road. Later Punjab food and supplies minister Bhart Bhushan Ashu too took exception to, what he called, the unusual haste shown in trying to raze unauthorised buildings in Jalandhar.

Ashu told TOI that as local bodies minister, Sidhu was heading the sub-committee on onetime settlement of unauthorised structures and the action could have waited till building owners were given another chance to comply with the new policy.

“Even though I am not aware of local details, I am not convinced about the timing of the demolition drive, especially when a policy will be ready by the month end,” Ashu said.

Ashu said that he would take up the issue in the next cabinet meeting.

Sidhu had, on Thursday, cracked the whip against officials of Jalandhar municipal corporation when he found many illegal colonies being developed in the city in violation of building bylaws. Many of the buildings had come up in upscale areas of the city.

Rinku termed the action as ‘anti-people’. “I am with the people and the government works in public interest,” he said, standing atop the bulldozer. “The government should make a favourable policy. We can’t give employment to people but when people are already involved in small businesses, we should facilitate them. Many of the so-called illegal colonies have been built by small builders or by the residents themselves and I will not allow any damage to them.”

Sidhu, who was in Phagwara on Friday, said “We will explain our stand to Rinku. He is our own man and his concerns would be addressed, but the action will continue.” He clarified that his orders were only against colonisers and that public interest was not being hurt.

The government intends to give relief to more than 8,000 unauthorised colonies and more than one lakh plots within these colonies that can be regularised once the new policy is approved. On Thursday, housing and urban planning minister had announced that the new policy would be in the public domain by June 30. The earlier cut-off date for regularisation of colonies was April 1, 2013. This has been extended to March 19, 2018. The colonies developed before April 1, 2013 will be regularised in non-compatible land-use zones of master plans.