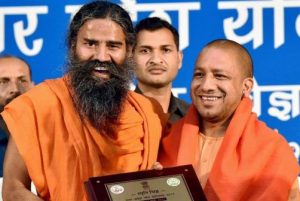 Uttar Pradesh Chief Minister Yogi Adityanath has spoken to yoga guru Baba Ramdev after Patanjali Ayurved Ltd announced that it is shifting the proposed Patanjali Food and Herbal Park from Greater Noida citing non-cooperation and a “disappointing attitude” of the BJP-ruled government in Uttar Pradesh. According to reports, the Chief Minister has assured Ramdev that he will personally look into the matter and promised that decisions will be taken at quick pace.

The Haridwar-based Patanjali Ayurved had on Tuesday announced to pull out its proposed Rs 6,000-crore mega food processing project in Greater Noida and blamed the state government for taking this decision. “The mega food park was coming up to make lives of farmers better. We had also asked for permission from the central government. There are paper work for which we requested state government. But due to their disappointing attitude, it couldn’t be done,” Acharya Balkrishna, MD, Patanjali Ayurved Ltd, told news agency ANI.

However, the government said that the project has not been cancelled yet and that Patanjali is yet to comply with the conditions required to get final approval. Food Processing Secretary JP Meena said that the company was earlier given four months to comply with certain rules required for setting up the plant and has been granted a month’s extension to meet the conditions.

“Patanjali was given four months time to meet the conditions required to get the final approval. There are four to five conditions, including land and bank loans, which any party that wants to set up mega food park has to fulfil,” the official told PTI on Tuesday. “We have given one month extension to Patanjali… they have to meet the condition. In case Patanjali does not meet the condition, we have no choice but to cancel. We have done it earlier in many projects.”

In a tweet on Tuesday evening, Patanjali MD Acharya Balkrishna said that the indifferent attitude of the state to be blamed for this decision. “Came to know about quashing of Mega Food Park, approved by the Centre, in Greater Noida. The pledge to bring prosperity to the lives of farmers in the land of Sri Ram and Krishna remained incomplete because of the indifference of the state government.”

The mega food processing project was slated to come along the Yamuna Expressway that runs between Noida and Agra. Former UP chief minister Akhilesh Yadav had in 2016 laid the foundation of food park. It was to be constructed in 455 acres. According to Patanjali, one the food park when become soperational, can produce goods worth Rs 25,000 crore annually and create over 10,000 direct jobs.