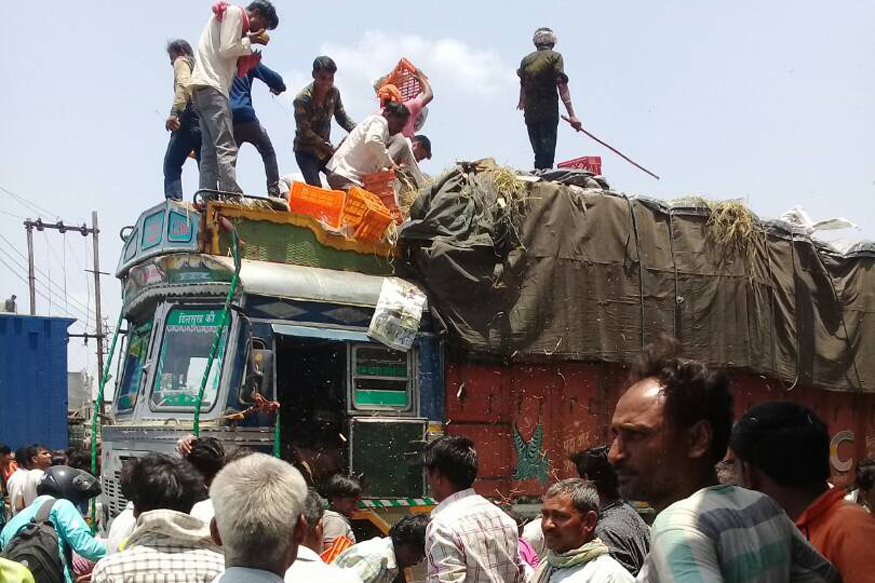 The protests blocked supply of vegetables, milk and other essentials by vandalising vegetable trucks and milk tankers

Three days of ‘Gaon Bandh protest’ backed by some farmer unions in the country has left commercial dairy farmers in Punjab furious due to mounting losses. Many have been struggling to manage milk produced in bulk, and have said that they are against spilling it on roads.

As part of the protest, dairy farm owners are not allowed to sell their produce to government-run milk plants and other dairies for supply in cities. Some commercial dairy farmers Sunday also said that with mounting losses, they will have no other option but to withdraw from the protest and sell milk to plants. Others said they were considering of setting up chabeels (giving milk out for free) on roads or donating it to orphanages and old age homes.

Speaking to The Indian Express, Daljit Singh, president Punjab Dairy Farmers Association (PDFA), Punjab’s largest association for dairy farmers with 27,000 members, said, “Just in three days, we have incurred losses in crores. There are 6,500 big dairy farmers who are producing 200 to 5,000 litres of milk daily. It costs Rs 5,000 to Rs 1.50 lakh. It is easy for farmers who have less milk produce. They can consume at home or distribute among poor. But how do you manage as much as 50 quintals of milk daily? We are not in favour of spilling it on roads. It is not the right way to protest. Roughly, dairy farmers are already under loss of 2 to 2.5 crore in three days.”

He added that they were trying to approach farmer union leaders and activists to find a solution. “We held a meeting today at Bajakhana in Faridkot with activists from Bhartiya Kisan Union (Sidhupura), but it was futile. Another meeting will be held tomorrow.”

Kulbeer Singh, a dairy farmer from Kapurthala, said that his farm produces 800 litres of milk daily and his chillers are already filled to capacity. “It is worth Rs 30,000 daily. In three days, I am already under loss of 90,000. Is this a way to protest? Is this causing any loss to the government? I have 3,000 litres capacity of chillers and they are almost full. I am planning to put a chabeel on road in coming days. But we will never spill it on roads. Earlier, I was selling milk to Verka.”

Balraj Singh Khaira, a dairy farmer from Jalandhar, said that he has been distributing his around six quintal milk produce among labourers and poor families since three days. “It is for around Rs 15,000-20,000, but there is no way I will spill it on roads. This way to protest is just adding to losses of farmers.”

Milkmen union also held a protest outside Rampura Phull police station in Bathinda. They alleged that they are being stopped from selling milk even when they wanted to.

In another incident at Lehra Mohabbat in Bathinda, a dairy owner Manpreet Singh alleged that he was manhandled and his vehicle was also damaged by some protesting farmers when he was loading milk and cheese in his vehicle. “My 2.7 quintals of milk and 12 kg of cheese was destroyed by the protesters. Are they going to pay for loss? They also damaged by vehicle,” he said.

Dairy owners also protested against farmers’ unions and spilled huge quantity of milk on roads in Bhawanigarh town of district Sangrur. They said that since farmers are not allowing them to sell milk in cities, they do not have space or any arrangement to store it. So, they should be allowed to sell milk or spill it on roads.

HS Sandhu, general manager Verka Milk Plant, Ludhiana, said that milk supply to consumers in cities hasn’t been affected yet. “We are managing somehow. Yes, the milk collection has been hit, but we have stopped drying 3 lakh litres of milk which we were doing on daily basis. We can’t say how coming seven days would be but milk supply to consumers has not been hit yet.”