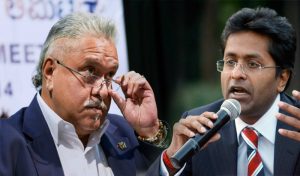 NEW DELHI: India on Wednesday impressed upon the UK the need to expedite the process of extradition of Indian fugitives and economic offenders, which include former liquor baron Vijay Mallya and ex-IPL boss Lalit Modi. At the Indo-UK home affairs dialogue here, the Indian side is also reported to have sought the help of British authorities to locate diamantaire Nirav Modi .

“We have sought the help of the authorities in the UK in the extradition of our wanted persons. The process is on and everyone knows that it is because of our proactive action, that Mallya now has to fight his extradition case in a UK court, investing his time and money,” said an official privy to discussions during the two-hour long meeting here.

During the talks, Gauba communicated India’s concern over activities of pro-Khalistan and Kashmiri separatist elements in the UK and urged it to maintain a vigil over such elements and take appropriate action including timely sharing of intelligence.

Last year, minister of state for home Kiren Rijiju had raised with the UK India’s request for extradition of 13 fugitives, including Mallya, Lalit Modi and cricket bookie Sanjiv Kapur.

Mallya, facing CBI and ED investigations, is accused of defrauding Indian banks of Rs 9,000 crore. He is currently contesting extradition proceedings initiated by India, in a UK court.

India had earlier moved ED’s request for extradition of Lalit Modi. However, Interpol had rejected the request for a red corner notice against him on the ground that no chargesheet had been filed against him in the Indian courts.

Nirav Modi and his uncle Mehul Choksi, who left India early this year, are wanted by authorities for allegedly duping Punjab National Bank of Rs 13,000 crore. TOI had earlier reported that information with officials of the Indian High Commission in the UK pointed to his being in the UK. A request to locate him is reported to have been made to the UK authorities on Wednesday.