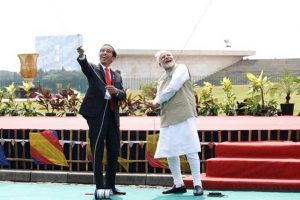 Prime Minister Narendra Modi, who arrived in Indonesia Tuesday night, was seen flying kites with Indonesian President Joko Widodo at a kite exhibition in Jakarta. They inaugurated the first joint kite exhibition themed on India’s epics Ramayana and Mahabharata at the Jakarta’s National Monument. The Ramayana theme has been designed by Indonesian organisers while the Mahabharata theme is designed by Indians.

Modi met with Widodo at the Merdeka Palace — one of the presidential palaces in Indonesia’s Jakarta — and was accorded a red carpet welcome on his arrival. He also visited Istiqlal Mosque in Jakarta.

The Prime Minister is on the first leg of his five-day three-nation tour to Indonesia, Malaysia and Singapore. After holding extensive talks on a broad range of issues, PM Modi and Widodo agreed to upgrade their ties to Comprehensive Strategic Partnership as the two countries signed 15 agreements including one on defence cooperation. The agreement also included the cooperation in the field of defence, space, science and technology, railways and health.

Modi, who is on his first ever official visit to Indonesia, said both the countries have agreed to upgrade their ties to Comprehensive Strategic Partnership. In a joint press statement after the talks, he also said that India’s Act East Policy and the vision of SAGAR (Security and Growth for all in the Region) matches President Widodo’s Maritime Fulcrum Policy.

“India and Indonesia will double their efforts to take bilateral trade to USD 50 billion by 2025,” he said.

Modi and Widodo, during the meeting, highlighted potential areas of cooperation in marine, economy, and socio-culture as well as discussed regional and global issues.

“Gaon Bandh” a call from Haryana
Scroll to top