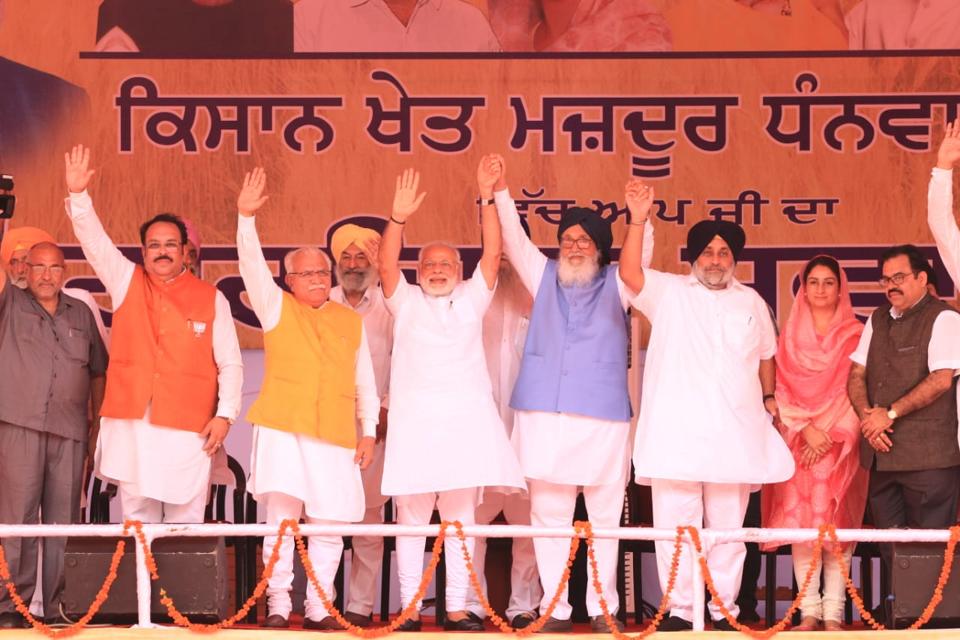 “Ever since the government took the historic decision to hike MSP, the farmers are relieved. They are more confident in their produce now. However, the Congress and its allies are losing sleep. They cannot stand the fact that farmers in the country are sleeping well,”

Accusing the Congress of “betraying” the farmers during the “70 years” of its rule at the Centre, Prime Minister Narendra Modi said at a rally in Punjab on Wednesday that the recent hike in the Minimum Spport Price (MSP) of Kharif crops — approved by the NDA government — has brought much relief to the farmers across country.

“Ever since the government took the historic decision to hike MSP, the farmers are relieved. They are more confident in their produce now. However, the Congress and its allies are losing sleep. They cannot stand the fact that farmers in the country are sleeping well,” Modi said at a ‘thanksgiving’ rally of farmers in Punjab’s Muktsar district.

Modi praised the farmers for their contribution, but blamed the Congress for their agricultural woes. “I bow my head in front of the farmers, they have broken all records in terms of agricultural production and for their hard work. No matter what the situation, you have always worked in the interest of the country. But the lives of farmers, which should’ve been happy, was filled with woes. The reason is that in the past 70 years, the party which took the responsible to head the nation, only made commitments and did nothing. It cared only about one family and its peace,” he said.

Modi said that the “entire country knows the reality” about the Congress’ dreams, which were only in the interest of the Gandhi family.

“Why have the farmers been restricted to earning profit of only 10 percent of the cost for the past 70 years? Congress never cared about farmers. Congress betrayed them, and made false assurances. But NDA government took efforts to change this,” said Modi.

Modi assured that the farmers from Punjab and Haryana farmers will benefit from the new MSP. “For crops like maize, and jowar, MSP of more than 50 percent has been approved. For the farmers growing bajra, the MSP has been increased two-fold,” he said.”Whether it is the soldier at the border or the farmer on his field, our government has attempted to enhance the lives of both. Our government implemented ‘One Rank and One Pension’ and also fulfilled its promises relating to MSP,” he added.

He asserted that his government will not overlook the problems faced by the farmers, and said that the vision to double farmer incomes by 2022 was formed right after the NDA government was formed. “We have been holding constant discussions on this topic since then,” he said.

Speaking about the various schemes of the Centre, the prime minister said: “The SAMPADA (Scheme For Agro-Marine Processing And Development Of Agro-Processing) scheme is in place so that the farmers don’t lose their produce. New warehouses and food parks are being built across the country. The entire supply chain is being strengthened and it is being ensured that the farmer does not suffer due to crop failure.

“Under the Krishi Kalyan Abhiyan, more than 25 lakh hectares of land in the country have been brought under micro-irrigation.”

He stressed that Punjab had benefited greatly from the NDA government’s plans. “A total of 60 lakh accounts were opened in state under Jan Dhan Yojana. Under the Ujjwala scheme, 7.5 million free gas connections have been given. 23.5 lakh people have got loans from MUDRA (Micro Units Development and Refinance Agency) scheme. Nearly four million people have been insured,” he said.

Modi also spoke of the recent ‘Ease of Doing Business’ rankings. “Haryana has made considerable progress and is on the third position on the the ‘ease of doing business’ report by the World Bank. I want to congratulate Chief Minister Manohal Khattar and his government for this feat. But I also want to urge the people of Punjab to ask their government and the Congress why their state is ranking low on the list. They should question on their states downfall since the end of Parkash Singh Badal’s governance,” he said.

Modi also expressed concern over the problem of stubble burning, and said that the central government has allocated over Rs 50 crore for Punjab, Haryana, Uttar Pardesh and Delhi under a scheme to tackle the problem.

He appealed to farmers not to burn crop residue keeping in mind the health concerns. “As per an estimate, if farmers don’t burn stubble and allow crop residue to remain on their fields, they can save an expenditure to the tune of Rs 2,000 per hectare on use of fertilisers,” he said.

Stubble burning has been a major concern in northern India during the harvesting season. It led to severe air pollution in National Capital Region and its neighbouring areas in the past few years, prompting the authorities to take measures to tackle the problem.

The event — jointly organised by the Shiromani Akali Dal (SAD) and the BJP in the view of the hike in MSP — was attended by Haryana chief minister Manohar Lal Khattar and SAD president Sukhbir Singh Badal.

On 4 July, the Cabinet Committee on Economic Affairs (CCEA) approved the MSP of 14 Kharif (summer-sown) crops. MSP for paddy was hiked by a steep Rs 200 per quintal.

Sukhbir Singh Badal had earlier said that farmers from Punjab, Haryana and Rajasthan would attend the rally and they would give a rousing welcome to the prime minister for his “bold and decisive” step to implement the Swaminathan Commission report which called for 50 percent profit on input cost.

After Modi’s address on Wednesday, the SAD chief praised him, while lashing out at the Congress.