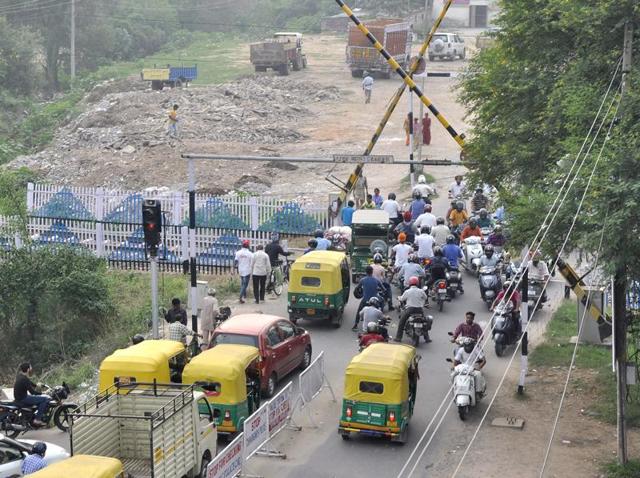 Local residents said after the closure of the railway crossing, rush on the internal roads in Modern Housing Complex towards Kalagram light point, which links to Madhya Marg, has increased.

Commuters through Madhya Marg are having a tough time due to traffic chaos following closure of the railway crossing 126 at Manimajra here due to an ongoing construction work of a Railway Under Bridge (RUB), even as the authorities are claiming to reopen it in the next 10-15 days.

Local residents said after the closure of the railway crossing, rush on the internal roads in Modern Housing Complex towards Kalagram light point, which links to Madhya Marg, has increased. “Earlier, commuters from Manimajra and Panchkula preferred the railway crossing, but as it has been barricaded from both the sides, people have no option, but to use the Madhya Marg,” said a local resident.

Though the RUB work had started in February, the road through the railway crossing had been closed on June 25 for shifting the underground pipelines of sewage, rainwater and drinking water.

In the peak hours, the stretch between Railway and Housing Board light points on Madhya Marg becomes more chaotic.

Sub-divisional Engineer (SDE) with the Chandigarh Municipal Corporation (MC), Joginder Kumar, however, said two-wheeler riders are allowed to use the crossing.

Even though the two-wheeler riders are passing through the railway crossing, Randhir Singh, a resident of Modern Housing Complex, said four-wheelers cannot. “We have to use Kala Gram light point to reach Madhya Marg. The crossing was considered to be an alternative route, widely being used by emergency vehicles, including ambulances,” said the Panjab University employee.

The SDE said the railway crossing will reopen within 10 days. “The work of shifting all the pipelines are in last stage. The road, which was dug for shifting the pipelines, will be reconstructed. “

The work of shifting the three underground pipelines is being done by a private contractor, Pawan Kumar, under the supervision of public health department of Chandigarh Municipal Corporation (MC).

A traffic police inspector, too, confirmed a communication from the public health department of the MC, suggesting that the railway crossing will reopen within a fortnight. He, however, said that it seemed to take more time.

Meanwhile, the work was halted for over three hours on Saturday following a complaint that the private contractor was stealing electricity from a nearby tube well for welding.

Senior officers, including SDE Joginder Kumar, went to the spot. Kumar said they found the complaint to be valid. “We have told the contractor to use his generator. Pawan said that the generator had developed a technical snag, so he had to take electricity from the nearby MC tube well in emergency. We are planning to take action against him,” said Kumar.

Later, contractor Kumar start using his generator for the welding work. A JE-rank officer, present on the spot, said, after the completion of the work of shifting the pipelines, the union territory administration will take care of rest of the work. “Railway authorities will take over in the last phase. It will take around seven months to complete the RUB,” said the officer.

The railway ministry had given a go ahead for the RUB back in 2013, however, the foundation stone was laid only in April 2017. The RUB will be of low height, 10 feet, under which CTU buses cannot pass. Its width will be 36 feet.

JEE, NEET to be conducted online, twice a year

Two juveniles sentenced to three years’ imprisonment each for killing a y...
Scroll to top