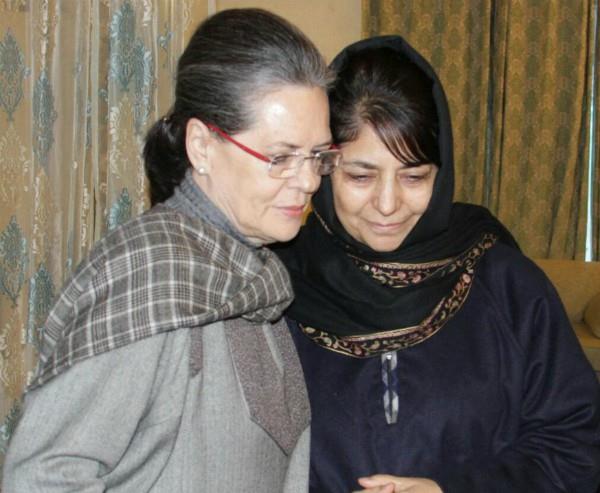 Former Jammu and Kashmir Chief Minister Mehbooba Mufti’s recent visit to Delhi and subsequent meeting of the core group of the Congress headed by former Prime Minister Manmohan Singh on Monday have triggered speculations that Mehbooba’s Peoples Democratic Party (PDP) and the Congress may join hands to form a new government in the state.

Further, a meeting of all MLAs and MLCs has been convened in Srinagar on Tuesday to discuss the party’s strategy following the collapse of the PDP-BJP government with the latter withdrawing support to Mehbooba.

Soon after Mehbooba’s visit to Delhi was finalised last week, the speculations of her meeting with top Congress leaders, including Sonia Gandhi, started floating in the political circles.

Though senior Congress leaders, including Ghulam Nabi Azad and the JKPCC chief GA Mir, have denied any move to join hands with the PDP the rumours have refused to die.

National Conference spokesman Junaid Azim Mattu, in an apparent reference to Amitabh Mattoo, tweeted: “A former advisor to the J&K CM is trying to cobble up an alliance between Congress & PDP. Perhaps that explains why @MehboobaMufti is in Delhi while rest of us are trying to keep our heads above the rising flood waters!”

It may be mentioned that the PDP and the Congress had also formed a coalition government in 2002 with the commitment of both parties having the post of chief minister for a period of three years each. However, that was not a happy experience for the Congress as Mehbooba’s father Mufti Mohammed Sayeed after enjoying chief ministership for a period of three years withdrew support to Congress CM Ghulam Nabi Azad on the issue of the Amarnath Shrine land agitation.

The Kashmir core group of the Congress comprising Manmohan Singh, Karan Singh, Ghulam Nabi Azad, P Chidambaram, Ambika Soni and GA Mir had recently visited the state and accused the BJP of mishandling the situation in the state.

However, the Congress is learnt to be divided again on joining hands with the PDP to remain in power for the leftover period of a little more than two years. One faction in the party was reportedly of the view that the party, which was at this point of time enjoying an edge over the BJP in the Jammu region, would face anti-incumbency factor in the next election and might not be in a position to come to power. There was widespread anger against the PDP in the Valley and sharing power with them would be suicidal.

This is the first meeting of the core group of the Congress after the fall of Mehbooba government following the withdrawal of support by the BJP.

The NC and the Congress had alleged that the BJP was trying to engineer defections as a result of which they asked the Governor to dissolve the Assembly to prevent horse-trading.

Meanwhile, within a day of losing power, Mehbooba’s loyal legislator Abid Hussain Ansari has virtually revolted against her by accusing her of having converted the PDP into a family fiefdom. She had appointed her family members on important positions, he alleged.

No support to any party: Mohammad Yousuf Tarigami

In a statement, Tarigami said he would not support any party for forming the government.

Reports said pro-separatists MLA Engineer Rashid was also not inclined to support any such formation.

4 killed in separate road accidents at Gurugram
Scroll to top