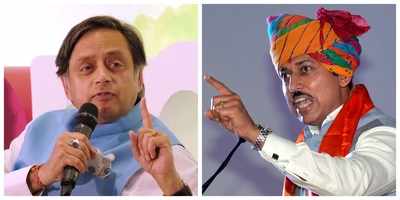 The Union minister was responding to Tharoor’s tweet which had cited a media report alleging Rs 35 lakh was spent to shoot the video.

The I&B minister took a dig at Tharoor’s mention of “lambs” in the tweet and said, “And I assure you, sir, not a single ‘lamb’ was sacrificed for the vid, let alone 35!”

Earlier today, the Congress leader had tweeted a news report claiming that the Union government has spent Rs 20 crore on advertisements on Yoga Day celebrated on June 21 and Rs 35 lakhs on a fitness video.

On June 13, a week before the Yoga Day, the Prime Minister had tweeted a video of him performing yoga.

“Here are moments from my morning exercises. Apart from Yoga, I walk on a track inspired by the Panchtatvas or 5 elements of nature – Prithvi, Jal, Agni, Vayu, Aakash. This is extremely refreshing and rejuvenating. I also practice breathing exercises. #HumFitTohIndiaFit”, was his post to the exercise video.
https://demokraticfront.com/wp-content/uploads/2018/07/64829219.jpg 200 400 Demokratic Front Bureau https://demokraticfront.com/wp-content/uploads/2018/05/LogoMakr_7bb8CP.png Demokratic Front Bureau2018-07-02 15:43:412018-07-02 15:43:41I assure you, sir, not a single ‘lamb’ was sacrificed for the vid, let alone 35!”:Rathore
0 replies

Chandigarh would soon house headquarters for Western Command of the BSF