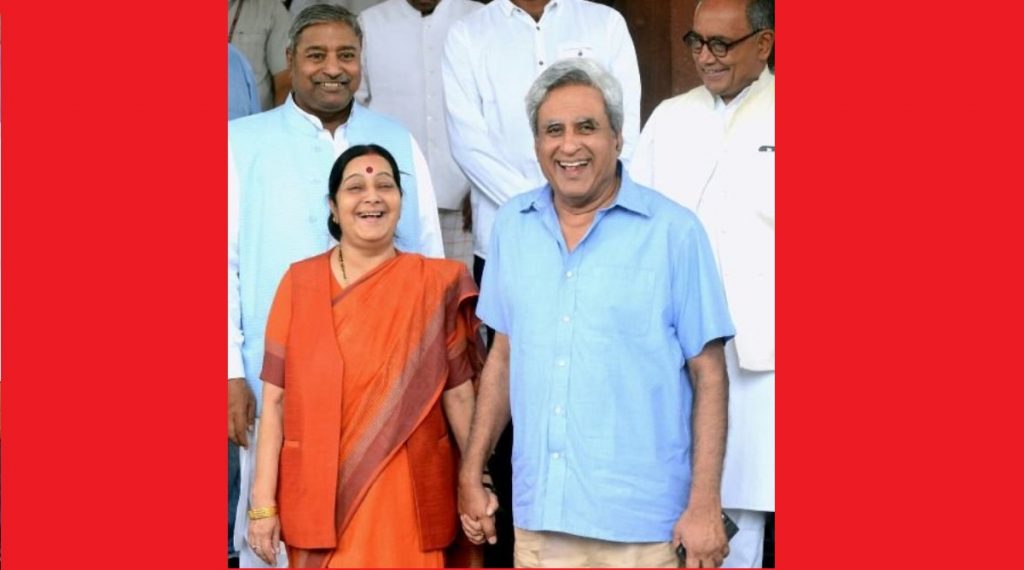 The barrage of hate directed at External Affairs Minister (EAM) Sushma Swaraj following her intervention in the Lucknow passport row involving an interfaith couple doesn’t seem to be subsiding.

The barrage of hate directed at External Affairs Minister (EAM) Sushma Swaraj following her intervention in the Lucknow passport row involving an interfaith couple doesn’t seem to be subsiding.

Days after Swaraj was forced to turn off the review section of her official Facebook page and expose the haters by ‘liking’ their tweets, the MEA continues to face verbal criticism bordering on the most abhorrent kind on social media.

Such has been the vitriolic hatred of the trolls that even Swaraj’s husband, Swaraj Kaushal, finds himself in the middle of the nastiness.

Earlier on Saturday, the former Governor of Mizoram posted a tweet containing the screenshot of a now-deleted tweet from a user who wanted him to “beat Sushma Swaraj and teach her not to do Muslim appeasement”.

But even after Kaushal, a senior criminal lawyer, called him out, the user didn’t stop posting objectionable tweets. “Somebody needs to set the EAM right” read a tweet posted in response to Swaraj Kaushal’s.

Addressing Kaushal, the user also wrote that Twitter allows him to say “what I want to say to you”.

On 25 June, Sushma had given back in kind to the trolls who took to social media to call her names. The EAM, who was not present in India at the time when the incident made headlines, was bombarded with a barrage of insensitive remarks by a section which was offended with the transfer of the passport officer at the centre of the row.

The incident dates back to 20 June. A couple, Mohammad Anas Siddiqui and Tanvi Seth, had alleged that a passport officer posted in the Regional Passport Office in Lucknow had asked Anas to convert to Hinduism and pulled up the wife for not changing her name after marriage.

The passport officer, Vikas Mishra, was transferred to Gorakhpur and the couple were issued the passports on Thursday, 21 June.

Mishra later denied the allegations saying he didn’t ask Anas to convert. He said he only followed the procedure and that Tanvi had a different name in her ‘nikahnama’ (wedding certificate), compared to that in her other documents, which was why he had asked for more proof.

Swaraj, who returned from her four-nation tour of Europe on 24 June, posted a message from her official Twitter handle in which she smartly called out those who trolled her.

“I was out of India from 17th to 23rd June 2018. I do not know what happened in my absence. However, I am honoured with some tweets. I am sharing them with you. So I have liked them,” wrote Swaraj.

FATF has formally placed the country on the ‘grey list’ for failing to curb...

US upgrades Pakistan on ‘human trafficking index’
Scroll to top