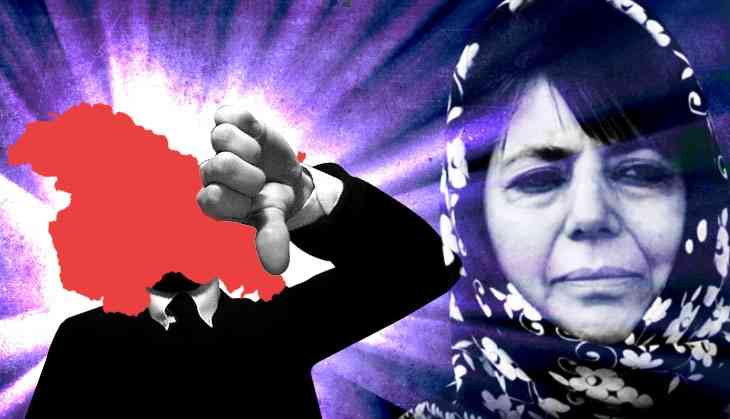 The talk of the BJP withdrawing support to the PDP started as a rumour in Kashmir, which was largely shrugged off. Nobody could imagine even in their wildest dreams that it would be the BJP which would abandon the coalition, considering alliance with the PDP had enabled it to become a ruling party in India’s only Muslim majority state, a seemingly improbable prospect up until 2014. But when the news turned out to be true, it still took time to sink in. And then people started talking. Soon social media went abuzz with posts and memes and Whatsapp forwards began circulating.

The dominant public mood that came to the fore wasn’t one of anger over the development but a sense of vicarious wish-fulfilment. An opinion poll run by a local daily showed 92 percent of the respondents approving the fall of the government.

“The BJP-PDP rule will be remembered for just one thing – bloodshed. And for the disgraceful wayMehbooba Musti government has been dumped, Kashmiris are feeling this collective sense of schadenfreude,” wrote the noted Kashmiri cartoonist Suhail Naqshbandi on Twitter.

Prominent activist Shehla Rashid wrote “the break-up was nothing but drama by the alliance partners to rid themselves of any accountability”.

“They are fleeing, in order to escape questions from the public on nepotism & political/economic failures (sic),” Shehla said.

Across the social media, the first few hours after the break-up of the coalition turned out to be a venting session for the accumulated mass contempt for the PDP, especially against its leader Mehbooba Mufti. Scores of memes, that started doing the rounds captured the catharsis in the Valley.

One such meme went like this: “Mehbooba detergent: pehle istimal karein, phir vishwas naa karein (first use and then don’t even trust,” a variation on a famous jingle about a detergent.

Both the posts and the memes played to the discourse that in withdrawal of the support by the BJP, the PDP had met a fitting comeuppance for its betrayal of the people’s mandate.

“The pinnacle of curse is being ousted by the partner & then resigning from the chair of slayer,” wrote one Mohsen Shah. “If only she had such a heart to resign after the countless barbaric killings of the innocent youth during her genocidal regime”.

Or this one: “This is how New Delhi deals with its chaprasis (servants), always.”

The alienation of the PDP is a huge fall for the Mehbooba, who could boast of the highest credibility among mainstream parties in the state, until her party decided to join hands with the BJP.

A part of the anger now directed against her comes from a deep sense of betrayal of this trust. Killings and blindings in 2016 destroyed her popularity. As a result, BJP’s withdrawal of support and the accompanying humiliation has become a sweet retribution. Hence, a reflexive response that exults in what is seen as “disgrace for the PDP”.

This is a sentiment that was voiced even by the former Chief Minister Omar Abdullah in his interaction with reporters: “Wish Mehbooba had gone with her dignity intact rather than being shunted out by the partner (BJP).”

Informed civil society opinion, on the other hand, sees the break-up as a long-anticipated end to an ideologically antithetical alliance.

“The alliance was doomed from the very beginning. The alliance partners were never gelled with each other. Prisoners of their respective ideological positions and constituencies, the two parties were in fact pushing the government in opposite directions,” wrote the noted Jammu based academician Rekha Chaudhary. “Except for the common goal to retain power, there was nothing common between the two partners. The differences were too profound and no effort was ever made to bridge them”.

Rekha said the Agenda for Alliance, was “a good document,” with a “potential of not only making the government work in the interest of the state, but also to resolve the inter-regional conflict in the long term”.

“But the agenda remained at the paper only. Lest they be seen as having compromised with their respective political positions, on the ground, each of the political partners was more aggressive about its ideology and therefore publicly confrontationist rather than conciliatory in approach”.

For now Mehbooba Mufti is alone. Neither the Congress, nor the PDP see it worth their while to extend support. Her political standing is at its nadir. The BJP has called for “an all-out war” against the militants which is likely to result in more human rights abuses. But Mehbooba’s political capital has deteriorated to an extent whereby even if she starts making people-friendly noises, she can only expect ridicule in return.