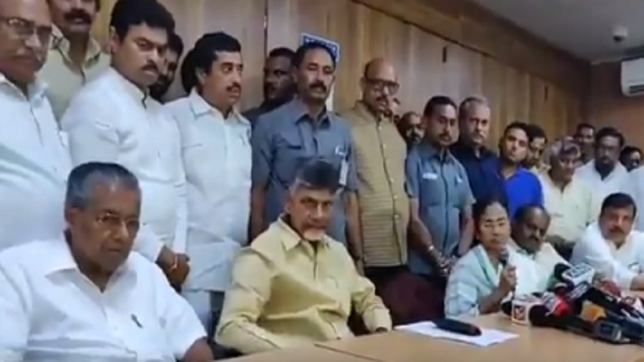 Chief ministers from four states met Prime Minister Narendra Modi on the sidelines of the Niti Aayog governing council meeting on Sunday and requested him to resolve the tussle between Delhi Lt Governor Anil Baijal and the AAP government.

“I along with the Hon’ble CMs of Andhra Pradesh, Karnataka and Kerala have requested Hon’ble PM today to resolve the problems of Delhi government immediately (sic),” West Bengal Chief Minister Mamta Banerjee tweeted after meeting with Modi.

The four addressed a press conference at Kejriwal’s residence in New Delhi, urging the Centre to “rise above politics”, solve the “constitutional crisis” and not “restrict the federal system”.

Before arriving at Kejriwal’s residence, the four chief ministers were not allowed to meet either the Delhi CM or Lt Governor.

Asked about the absence of support from the Congress, which has attacked Kejriwal’s protest as an attempt to obscure the AAP failures, Banerjee said, “I do not know, because the Congress has its own existence in Delhi and it doesn’t want any other party to come into power. That is their problem.”

The AAP is planning to hold a protest march from Mandi House to PM Modi’s office. “Though no formal permission was taken from the police by AAP for the Sunday march, security arrangements have been made nevertheless. Since Section 144 (prohibitory orders) are already imposed in New Delhi and no gathering is allowed around the PM’s office, the protesters will be dealt with according to the law,” said a police officer.

The party has been demanding agitating IAS officer’s to end their “strike” and return to work.  Kejriwal, along with his three cabinet ministers, has been on a sit-in protest at L-G’s office, demanding his intervention to end the “strike”. The bureaucrats, on the other hand, maintain that no such strike is going on.