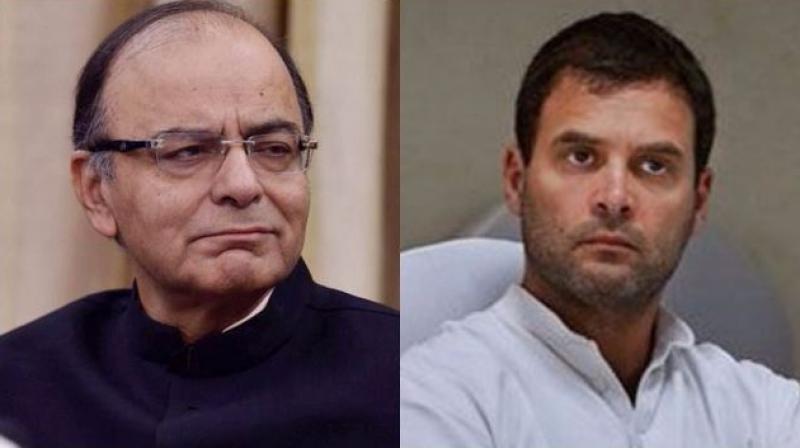 NEW DELHI: Taking a jibe atRahul Gandhi for his anti-Narendra Modi tirade, Union minister ArunJaitley questioned the Congress President’s wisdom saying that it has to be acquired through learning and cannot be inherited.

The Congress party has become “ideologyless” because its “only obsession is a person called Narendra Modi”,  Jaitley said in a Facebook post.

Rahul Gandhi has been attacking the BJP government for waiving loans of Rs 2.5 lakh crore by big corporates, as also criticising the Mudra Yojana.

Observing that the UPA government during 2008-2014 indiscriminately lent money through banks to 15 big loan defaulters, Jaitley said Rahul Gandhi prefers the “Gobbelian traditions to say the exact opposite”.

“For a President of a national party not to understand this basic procedure of bank functioning should be a matter of concern to the entire party as also the country. In dynastic parties political positions are heritable. Unfortunately wisdom is not heritable. It has to be acquired through learning,” he said in a post titled ‘Is Congress Becoming Ideologyless? Is Anti-Modism its only ideology?’

Rahul Gandhi earlier this week cited the examples of successful American entrepreneurs to attack Modi’s policies, and described the founder of Coca-Cola as a ‘shikanji seller’ and that of McDonald’s a ‘dhaba wala’. +

“Though factually what he stated was incorrect, the larger point is that he saw virtues in these professions which can act as a launch pad for many start-ups.

“The great grandson of the man who authored ‘The Discovery of India’ could with his customary inaccuracies one day give to this country his monumental work on ‘The Rediscovery of Coca Cola’,” Jaitley said.

He further said that there is no ideological pattern in Gandhi’s statements. “Ignorance with anti-Modism is a common thread”, he said.

Dynastic political parties are family and personality dominated and ideology takes a back seat, he said.

“The leader’s ill-informed instincts become the ideology. This can only happen to a party which becomes ideologyless; pushes itself to the fringe; is willing to act as a tailender to regional parties. All this because its only obsession is a person called Narendra Modi,” Jaitley said.

On Congress leader P Chidambaram’s comment that frying pakodas + is not job creation, Jaitley said “being cleverer than rest of his colleagues, he perhaps was trying to neutralise the success story of the Mudra Yojana where 12.90 crore loans have been given for self-employment to various weaker sections”.

Jaitley said the total of these loans has touched Rs 6 lakh crores and created work for millions of people.

Cong Attacks Jaitley Over jibe at Raga
Scroll to top