JNU student rights activist and former vice president of the JNU students union Shehla Rashid took a swipe at Union Minister for road transport and highways Nitin Gadkari saying the minister is getting “worked up” about a sarcastic tweet while another JNU scholar Umar Khalid, Rashid claims, is being hounded by the media.

Early Sunday, The Hindu is reporting that Umar Khalid has filed a complaint with the Delhi Police alleging that he received death threats from a man who identified himself as fugitive gangster Ravi Pujari.

Although Shehla Rashid does not specify which “sarcastic” tweet she is referring to, the recent stream on her Twitter handle points to her sharp reactions after news trickled in, via the Pune police, about an alleged assassination plot against Indian prime minister Narendra Modi.

Responding to Nitin Gadkari’s tweet saying he plans to take “legal action on anti-social elements who have made bizzare comments; attributing personal motives to me, regarding the assassination threat to PM @narendramodi”, Rashid asks: “Mr. Gadkari, will you also take action against Rahul Shivshankar?”

The Twitter brawl began with another Rashid tweet earlier Saturday saying that the RSS and Union Minister Nitin Gadkari were planning to assassinate Prime Minister Narendra Modi. Rashid has told India Today that the letter about a Modi assassination is “fake and to divert attention from government failures” 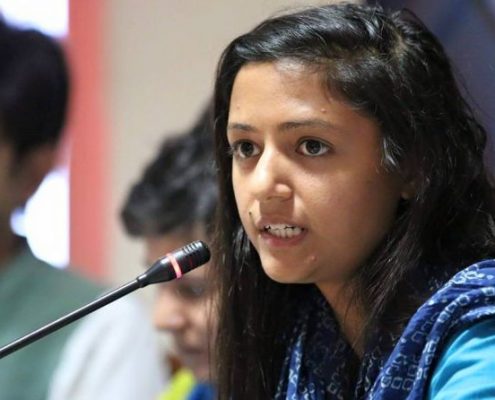 Rashid’s tweet comes in the context of a letter, allegedly written by Maoists, that carried details of plans to launch a ‘Rajiv Gandhi type incident’ to target Modi: “Looks like RSS/Gadkari is planning to assassinate Modi, and then blame it upon Muslims/Communists and then lynch Muslims #RajivGandhiStyle”.

Pune police claim to have seized a letter dated 18 April this year from five people arrested in connection with the Bhima Korean violence in which they talk of a “plot” to assassinate India’s prime minister Narendra Modi in a “Rajiv Gandhi-type” attack. Former Indian prime minister Rajiv Gandhi was killed in Sriperumbedur, Tamil Nadu, on 21 May, 1991 by a Sri Lankan suicide bomber.

Pune Police said the letter they intercepted was written by R to “comrade Prakash” was found in the laptop of Rona Wilson, an alleged Maoist. Wilson, Sudhir Dhawale, Surendra Gadling, Mahesh Raut and Shoma Sen were arrested Wednesday.