While the visuals of a Sikh man donning the uniform of the Rashtriya Swayamsevak Sangh (RSS) may have astounded many, over the proverbial mixing of oil and water, the truth is that the Hindu nationalist organisation has had dedicated wings for Sikhs and Muslims for years now.

On Thursday, former president Pranab Mukherjee presided over an RSS event in Nagpur. Arguably, the most talked about photograph from the event is that of a middle-aged Sikh man dressed in the right-wing organisation’s trademark khaki, speaking on the dais. Given the RSS’ image of a hardliner Hindutva organisation, seeing a follower of another religion at such a high-profile event in its headquarter in Nagpur left people perplexed. 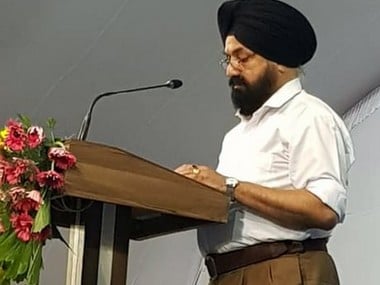 But those who know RSS well were not surprised. While the Rashtriya Sikh Sangat was created in 1986 to promote brotherhood between Hindus and Sikhs especially in Punjab, the Muslim Rashtriya Manch was formed in 2002 to woo Muslims who had remained aloof from the ideology of the Sangh.

The Sikh who shared the stage with RSS chief Mohan Bhagwat and Pranab Mukherjee on Thursday was Gajendra Singh, prant sanghchalak of RSS in Uttarakhand. He is the additional advocate general at Nainital High Court.

The re-branding of RSS

Although known for vigorously promoting the Hindutva ideology, RSS has been working to bring a change in its image as a Hindu-only outfit and become a nationalist brand instead. For this, the RSS is running a campaign where Sikhs and Muslims are made members of the organisation and persuaded that its ideology is not to harm people from other religions who are nationalists.

Punjab’s RSS secretary Yash Giri claims that all religions originating from the Indian sub-continent have the same source. He told Firstpost that Hindus, Muslims, Sikhs and even Christians living in India share the same ancestors and that the “RSS is working only to remind them of this fact”.

“We only say that those living in India are Hindus. Even if they go to mosques, gurudwaras or any other place of worship. They are still Hindus because they share the same ancestry. While a nationalist Muslim is welcomed in RSS, we are against those who support the ideology of conversion,” he said.

He said that the holy book of Sikhs, Guru Granth Sahib, has the word ‘Hindustan’ written several times that makes it clear that Sikhs also have the same history as Hindus in India. “We are getting a good response from Sikhs in Punjab who are joining the wing for the community,” said Giri.

However, the Rashtriya Sikh Sangat has come under attack, verbal as well as fatal, multiple times in the past. In 2004, the then chief of Akal Takht, the highest body of Sikhs, declared the wing of the RSS as anti-Sikh and asked the members of the community not to have any association with them.

In 2009, Rulda Singh, a senior leader of Rashtriya Sikh Sangat, was shot dead in front of his house in Patiala by members of a Sikh militant group.

Jasbir Singh, Rashtriya Sikh Sangat’s kshetriya sanghathan mantri of Punjab, said the exact number of members of the organisation cannot be disclosed. “We have memberships in thousands but those people do not come out openly due to threats from radical elements. Many Sikhs have joined our organisations as the RSS believes in Hinduism not as a religion but as a nationality,” said Singh.

The leaders of Rashtriya Sikh Sangat have received threats many times from fundamentalist organisations. “Our aim is not conversion. A Sikh will go to a gurudwara like a Muslim goes to a mosque. Our aim is to bring both of them in the mainstream nationalism without threatening their religious practices,” he said.

The increase in activities of the Rashtriya Sikh Sangat in Punjab is also believed to be linked to the upcoming 2019 Lok Sabha elections. The Bharatiya Janata Party (BJP), considered as the political wing of the RSS, often seeks help from Sangh workers in different regions of the country for political campaigning. It is common knowledge how RSS workers mobilised support for Prime Minister Narendra Modi during the last Lok Sabha elections.

How successful is RSS with Muslims?

On the other hand, Muslim Rashtriya Manch (MRM), the Muslim wing of RSS, is working in states with substantial Muslim population such as Uttar Pradesh, Jammu and Kashmir, Kerala and West Bengal.

While the wing is not much popular among Muslims due to their differing ideology with RSS, it still has membership from the community. RSS had recently rejected the idea of allowing its Muslim wing to host an iftar party at its Nagpur headquarters. The MRM had organised an iftar party in Mumbai on 4 June, which was boycotted by many Muslim organisations in the city.

One of the Muslim members of RSS, Amir Rasheed, had announced a reward of Rs 51,000 last month to the person who removes the portrait of Muhammad Ali Jinnah from the Aligarh Muslim University. He also sought permission from the vice-chancellor of the university to allow him to launch an RSS shakha on the campus but was denied.

“After this entire incident, the Muslim community has boycotted me and even my family wants to disown me. The marriage proposals that had come for me have been terminated due to my allegiance with RSS. However, the support from RSS is allowing me to take all the pressure,” Rasheed said over the phone.

Admitting that he hated RSS like many other Muslims, what changed his heart was a reply from RSS chief Mohan Bhagwat to a letter that he had written seeking answers regarding the organisation.

While the number of Sikhs and Muslims in RSS may be few, they are not bound to attend shakhas and rigorous training given to other Hindu members of the RSS. “We have many Muslim and Sikh members in RSS but they do not prefer to come out in the open. While there are shakhas even for them in different parts of the country, their frequency is less. They have the same ideology as ours,” said senior leader and prant sanghchalak of RSS Brigadier (retired) Suchait Singh based in Jammu.