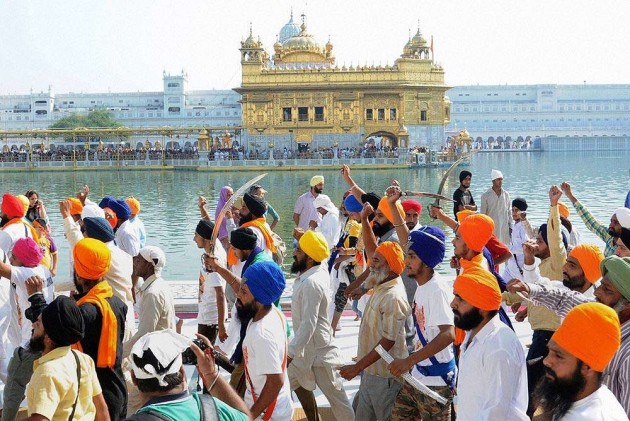 Brandishing of swords and open use of sticks was witnessed on Wednesday during a ceremony to mark the 34th anniversary of the Army’s ‘Operation Blue Star’ inside the Golden Temple complex.

The clash between radical Sikh elements and the Shiromani Gurdwara Parbandhak Committee (SGPC) took place right in front of the Akal Takht, the highest temporal seat of Sikh religion.

The incident took place just about 100 feet from the sanctum sanctorum ‘Harmandir Sahib’, the holiest of Sikh shrines located inside the Golden Temple complex in Amritsar.

At least one person was injured as the SGPC task force members tried to prevent the radical elements from disturbing the ceremony.

Police personnel, present inside the shrine complex in plainclothes, tried to control the situation from getting out of hand.

“A turban was thrown on the ground in the clash,” one eyewitness toldnews men.

The SGPC officials said the situation was prevented from getting out of control due to swift action by the task force members.

Akal Takht jathedar (chief) Gurbachan Singh said the ceremony was held “peacefully” as a remembrance of the sacrifice of hundreds of people who were killed during the Army’s ‘Operation Blue Star’ in June 1984.

The Army carried out the operation to flush out heavily armed militants and radicals from inside the shrine complex between June 1-10, 1984.

Aam Aadmi Party and Congress are likely to shake hands