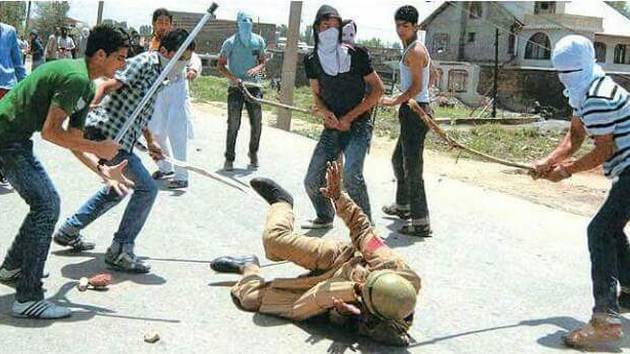 A CRPF vehicle targeted by protesters in downtown Srinagar ran over three people in an attempt to get away, triggering a fresh wave of protests and criticism for the government. One of the three who had received serious injuries, later died.

The incident in Srinagar’s Nowhatta area, just a few days before Home Minister Rajnath Singh is to visit the valley, could dampen the centre’s renewed efforts to reach out to Kashmiri youth after announcing the Ramzan truce with terrorists.

Mr Singh had planned to use his visit to not only review preparations for the Amarnath Yatradue to begin on June 29 but more importantly, signal his intent to engage with all stakeholders including the Hurriyat leaders.

The outrage over the latest incident could overshadow the outreach.

A police officer said the incident took place when the CRPF vehicle, on its way back after dropping a senior officer, ran into a street protest.

The sequence of events isn’t very clear yet.

But video footage that has emerged shows the vehicle encircled by a mob, people trying to force their way into the vehicle and the driver trying hard to get away.

Another clips shows the vehicle driving through the hostile group of people who are throwing stones and bricks from close range, and people removing one of the injured.

A couple of photographs that made its way to social media showed the vehicle just before it ran over a youth.

National Conference leader Omar Abdullah was unsparing in his attack on Chief Minister Mehbooba Mufti, who has not spoken on the incident. “Ceasefire means no guns so use jeeps,” he tweeted, asking Ms Mufti if this was the standard operating procedure of dealing with protesters.

But the Jammu and Kashmir police tweeted that “a selective picture” did not present the “whole scene”, a reference to the videos and pictures that showed the aggressive mob attacking the vehicle.
Mr Abdullah’s party described the pictures of a man being run over by a CRPF gypsy “haunting”.”The gypsy was attacked – that’s a fact – yes. However, it’s a failure of the local police in the area to have allowed a CRPF gypsy to pass through an almost 200 strong hostile crowd,” National Conference spokesperson Junaid Azim Mattu tweeted, blaming the police for allowing the jeep to pass through a hostile crowd.

“Almost every single civilian casualty in Kashmir is due to continued, repeated failures at crowd control, sanitisation of encounter sites and policing blunders. It’s not rocket science! You allow a CRPF gypsy to speed through a hostile crowd – didn’t you know this could happen???,” Mr Mattu said.