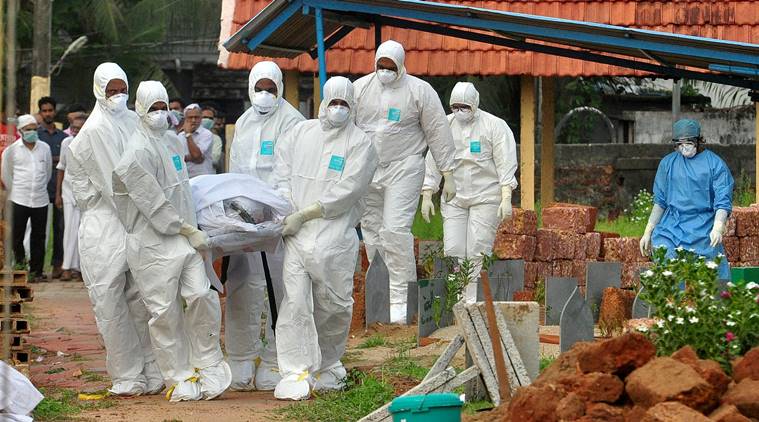 Doctors and relatives wearing protective gear carry the body of a victim, who lost his battle against the brain-damaging Nipah virus, during his funeral at a burial ground in Kozhikode, in the southern Indian state of Kerala,

At the start of this week, there was a relative calm in the corridors of the state’s health department. The number of deaths resulting from the outbreak of the Nipah virus infection had stabilised at 13, with two others undergoing treatment at the Kozhikode Medical College showing signs of recovery.

More than 150 blood and fluid samples of suspected patients sent for testing had come back negative and there were no new positive cases. Health officials and doctors had heaved a sigh of relief believing the storm had passed. But, with three more deaths reported in the last two days, Kozhikode and its adjoining district of Malappuram have once again sunk into a state of consternation. 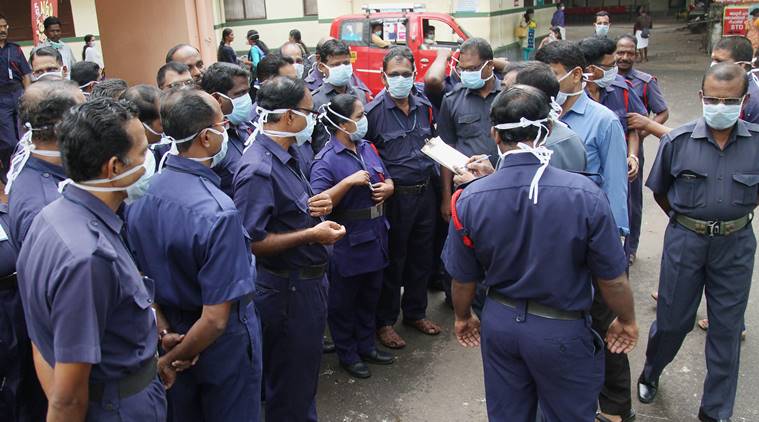 Kozhikode: Security staff being given instructions by the head after the outbreak of Nipah virus at Medical College in Kozhikode

As per the latest figures of the health department updated as of Thursday evening, 16 patients have now succumbed to the virus, excluding the first victim whose samples were never sent for testing. He is believed to be the ‘index’ case from whom the virus spread but since his death occurred before the samples could be sent for testing, it was never confirmed by medical officials.

A total of 18 cases have been deemed positive for the virus, with 14 in Kozhikode and 4 in Malappuram district. Out of a total of 196 fluid samples sent for testing to National Institute of Virology in Pune, 178 samples have come back negative. As of Thursday evening, a total of 11 people are under observation and being routinely checked for any signs of the virus. Also Read: Nipah virus identified first at MCVR lab: ‘Immediate response to situation helped’

The health department on Friday issued an advisory asking those who were at the Medical College in Kozhikode visiting the casualty, CT scan room and waiting room on May 14 between 10 am and 5 pm to immediately contact the state Nipah cell for directions. It also asked those who visited the Balussery Taluk Hospital on May 18 and May 19 till 2 pm to do the same. Those, who were in contact with the deceased on Wednesday and Thursday, must also get in touch with the Nipah cell, the department said. 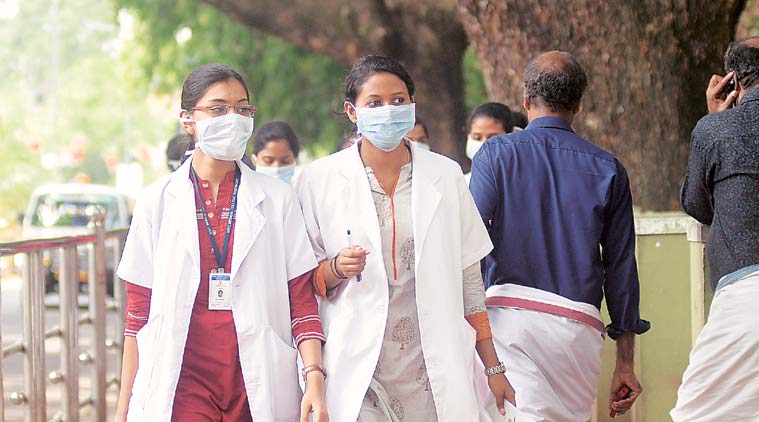 Till now, health officials were under the impression that the point of contact between the infected and ordinary patients was limited to the Medical College and the Perambra Taluk Hospital, where the first victim was initially admitted. But now, the surveillance has been extended to the Balussery hospital as well, where 25-year-old Rasil, the latest victim, was first admitted. With the death of Rasil, the health department has realised that it has to substantially expand the contact list and bring more people, who may have been in contact at these hospitals at those specific hours, into it.

A senior health official, requesting anonymity, said the recent death of Akhil, a truck driver, who is believed to have contracted the infection from the ‘index’ case at the casualty ward of the Medical College, has given the health department reason to worry. Akhil’s name was never present in the ‘contact’ list of those who were in close touch with the earlier deceased. But officials say Akhil had visited the casualty section of the Medical College when he was a bystander for another patient, around the same time the ‘index’ case visited the hospital. 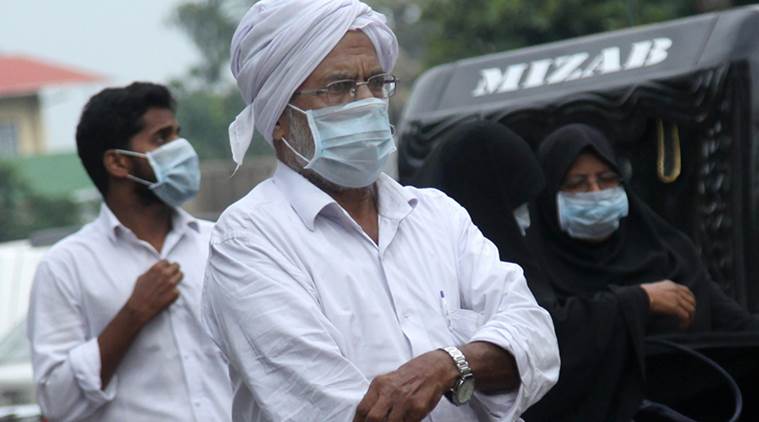 Kozhikode: People wear safety masks as a precautionary measure after the ‘Nipah’ virus outbreak, at Kozhikode Medical College, in Kerala

“Initially, our contact list had around 800 persons, but now after Akhil’s death, the list has expanded beyond our expectations. So the department is now raising large health squads with officials from the panchayat and revenue teams to individually monitor these people. It is a huge task. We will first divide these contacts based on high-risk and low-risk. Then we will use our resources to individually contact them and ask them about their conditions. If they report any sort of uneasiness in the last few days, then we can get them to the hospital right away,” he said.

The pattern of deaths so far

It is clear that the source of the outbreak originated from the family of Moosa Haji who resided in Soopikada in Changaroth panchayat. The first suspected victim of the virus (suspected because his sample was never tested) was 23-year-old Mohammad Sabith, who may have come in contact with an infected fruit-bat, considered the natural carriers of the NiV. While Sabith, initially admitted to Perambra taluk hospital, passed away on May 5, his elder brother Mohammad Salih and his paternal aunt Mariyamma too died in quick succession in the third week of May. It was these deaths, all within the same family, that sparked concerns in the health department and prompted them to send samples for testing, all of which came back positive. Last week, the third death in the family occurred when Moosa Haji, who had been put on ventilator at the Medical College, also passed away. 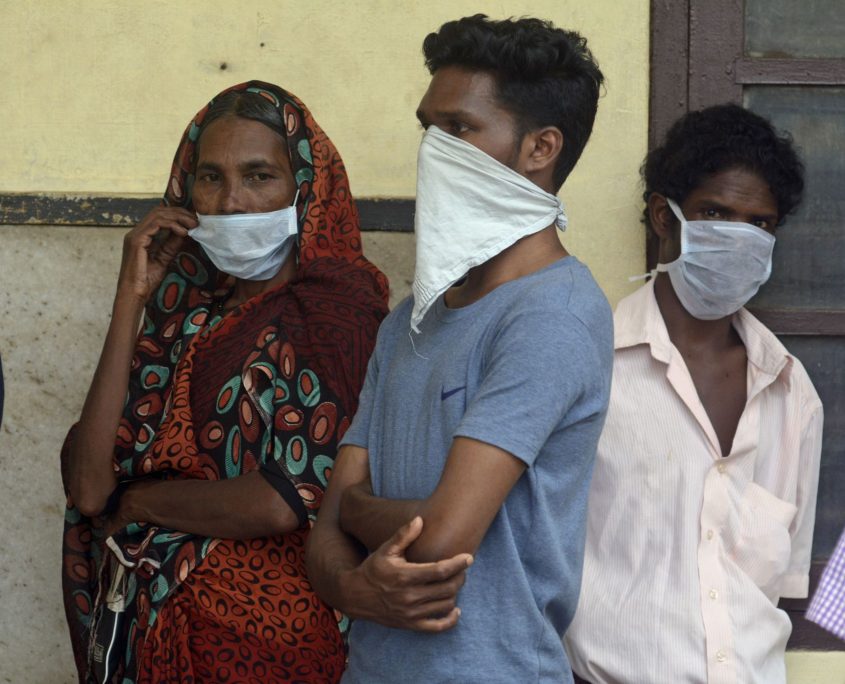 A senior doctor, a member of the core team, confirmed that all except one of the 16 casualties had contracted the virus through primary contact with any of the members of Moosa Haji’s family. These transmissions are likely to have taken place either at the Perambra hospital or the Medical College’s CT scan area, the ICU and the corridors of the radiology department. Some cases include Nurse Lini, who had taken care of Sabith at Perambra and Janaki, who had been admitted besides Sabith at the same hospital.

Only Rasil, the latest victim, is believed to have got transmitted from a secondary contact — Ismail, one of the earlier victims of the virus. It is being suspected that both Rasil and Ismail had slept on beds beside each other at the hospital in Balussery. While Rasil was admitted to the Medical College on Thursday with symptoms of encephalitis, he died the same day.

“Every unnatural death needs to be investigated. We were able to make early diagnosis and early detection, but it is true that the surveillance and measures to contain the infection especially at the Medical College should have been strengthened,” an official admitted. 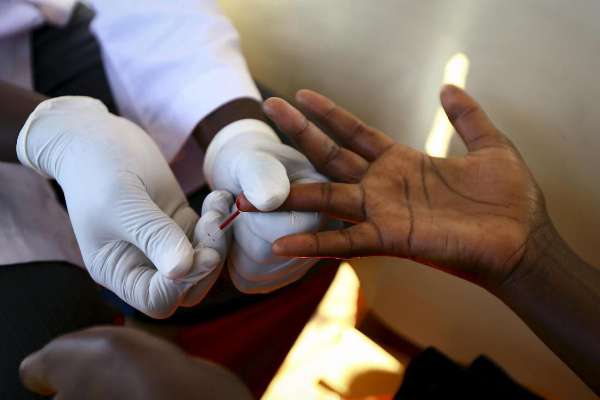 Dr G Arunkumar, head of the Department for Virus Research at Manipal, said the strain of virus detected in Kerala is very similar to the cases found in Bangladesh.

“Our preliminary analysis suggests that the strain found here is closer to the Bangladeshi virus strain, almost 98% similar. The Bangladeshi strain had a much higher mortality rate than the strain which was first discovered in Malaysia,” he said.

With only two patients, who were tested positive for the virus, recovering, the mortality rate in Kerala has been a shocking 90 per cent. Even though the incubation period is quite long, ranging from 4 days to 21 days, sometimes even extending in rare cases to 60 days, the rate of the spread of the infection is very fast, leaving little time for the patient to recover. Death, in most cases, happens due to cerebral haemorrhage.

“By the time we identify the case, the recovery period may be less,” he added. However, Dr Arunkumar stressed that there is no need to panic as the infection has not gone out of control. “It is still under our control because it has not gone into the community. We need to identify and detect new cases whenever they come,” he said.