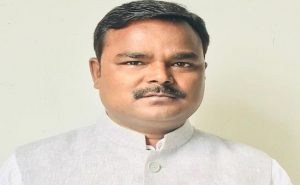 Tejashwi Yadav on the occasion said  “JDU fielded a candidate who was accused of rape and theft both. This is people’s response to Nitish Kumar’s insult to their mandate. He deserted the grand alliance that was elected to power and went to side with BJP instead, this is people’s answer to that.”

“Those who talk big about the face value and charisma of Nitish Kumar, they should know that only 499 votes went in JDU’s coffer this time.  Nitish has lost three by-polls ever since he has sided with BJP,” he said.

After 10 rounds of the ongoing ballot counting, Shahnawaz Alam had established the comfortable lead over Janata Dal-United’s Murshid Alam.

Apart from RJD and JDU candidates, a third Independent candidate Mohammad Shabbir is also in the fray.

Voting for the seat took place on Monday.
The JD-U was backed by the Bharatiya Janata Party (BJP), while the RJD had the support of the Congress and Hindustani Awam Morcha (Secular) of former Chief Minister of Jitan Ram Manjhi.