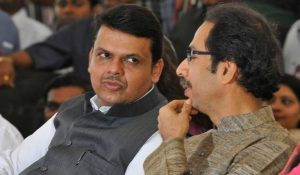 In a jolt to its ally Shiv Sena, the BJP on Thursday won the bypoll to Maharashtra’s Palghar Lok Sabha seat by defeating the candidate of the Uddhav Thackeray-led party by 29,572 votes.

Addressing a presser just after bypoll results here, Sena chief hit out at the BJP saying though it has won the byelections but the victory margin of the saffron party has reduced and 60 per cent of the voters have rejected it.

“Out of over 8 lakh people who voted in Palghar, over 6 lakh rejected the BJP,” he said.

Before the press meet, there emerged reports that the Sena chief might ask his ministers to resign from the Devendra Fadnavis-led Shiv Sena-BJP coalition government in Maharashtra. However, Thackeray refrained from commenting over it.

He, however, said the BJP doesn’t need friends. Reacting to which, Fadnavis said as the elections are over, Sena should not talk about the past. The chief minister said the BJP is always for an alliance, but it’s upon Sena to decide.

Thackeray also launched an attack on BJP leader and Uttar Pradesh chief minister Yogi Adityanath, who campaigned for the saffron party in Palghar.

Referring to BJP’s defeat in bypolls in past and on Thursday, he said: “Yogi Adityanath is losing in his own state and he is coming to campaign here (in Maharashtra). Janta ne Yogi ji ki masti utaar di hai.”

Last week, Thackeray had slammed Adityanath for not removing his footwear while garlanding a photo of Shivaji. In Shiv Sena mouthpiece Saamana, he said he felt like hitting Adityanath with his own footwear.

Both BJP and Sena were involved in an ugly war of words during the campaigning for the Palghar Lok Sabha bypoll.