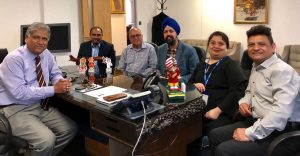 British Sikh MP Tanmanjeet Singh Dhesi today met the new head of Air India for UK and Europe operations Debashis Golder at their UK headquarters in London to discuss the reintroduction of direct flights between London and Amritsar.

Disclosing this MP Dhesi said, “I updated him on my meetings over the last year with his predecessor Ms Tara Naidu, along with those in Delhi and the Punjab Ministers about the long-pending demand of the Punjabi diaspora for direct flights between the Heathrow (UK) and Amritsar airports.

“All in all a very positive meeting, wherein I was assured of Golder’s strong cooperation to liaise with senior people in Delhi, to get clearance for the Heathrow- Sri Guru Ramdas Amritsar international airport Amritsar flights to commence as per the community’s legitimate demand.  Air India will hopefully soon deliver us the good news”, he added.

In a statement first turbaned Sikh MP from Europe Tan Dhesi, as called in Britain, stressed that he was aggressively pitching for ensuring direct contact with UK and Punjab, a crucial demand of the Punjabi diaspora since direct flights to holy city were cancelled years back.

Dhesi informed her that the Punjabi diaspora as well as business persons from both sides have been longing for direct air connectivity to their native lands. He suggested to the Air India representative that there are three daily direct flights between Heathrow-Delhi and one of these could be extended to Amritsar so that people from the Northern States could also benefit from direct connectivity with Europe.

He further informed that earlier he had a meeting with London based aviation firm Virgin Atlantic’s senior manager David Hodges also and presented various facts and figures about the potential of very lucrative air route for global tourist capital Amritsar which being visited by millions each year. Dhesi told that to serve the community on both sides he would leave no stone unturned to reintroduce the international connectivity between Britain and Punjab.