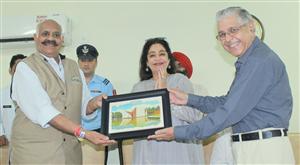 Hon’ble Governor of Punjab & the Administrator of Chandigarh,  Shri V.P. Badnore, and Smt. Kirron Kher, Member of Parliament will be unveiling the plaque of Dewan Anand Kumar Ji, inauguration of new T-1, Flats at PU South Campus and inauguration of GH-10 on May 29, 2018. The background material for the three spots is as given below:-

Neerja Bhanot Girls Hostel # 10: The new girl’s hostel at PU, is named after Neerja Bhanot, the youngest recipient of India’s highest peacetime Gallantry Award, the Ashoka Chakra. The hostel will accommodate as many as 336 students. It consists of 38 rooms with attached washrooms and 130 normal rooms. All rooms will be sufficient for two people. The rooms are well lit with sufficient and separate space for reading. It has a seminar hall also.

PU DUI awarded for contribution to Sanskrit
Scroll to top