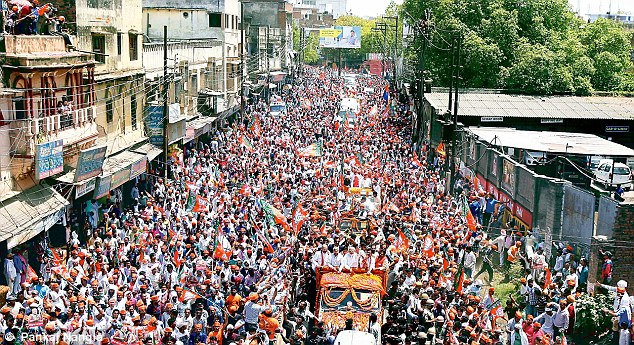 The ‘Modi wave’ continues to remain a powerful force and the NDA will form government again 2019, but the win may not be as thumping as it was in the 2014 General Elections, predicted ABP-CSDS survey. The survey predicts that the BJP and allies could bag 274 seats while Congress-led UPA may secure 164 seats. The others are expected to win 105 seats. The survey, however, comes with a disclaimer that “if the polls were held today” which means that it takes into consideration the performance of the BJP-led government in the last four years.

There are 543 seats in the Lok Sabha and majority mark needed to form the government is 272 seats. In 2014 General Elections, BJP alone had won 282 seats and was able to form an absolute majority government. The National Democratic Alliance (NDA) had in 2014 won with an overwhelming majority, taking 336 seats. If the findings of the ABP-CSDS translates into reality, then the picture could be slightly different in 2019. BJP may not able to form the government on its own and would have to rely on allies to hold on to power.

So all in all, BJP’s dominance on Indian politics would continue, but the picture won’t be as pleasing for them as it was after the 2014 Lok Sabha elections. It is one thing for a party to have the majority numbers on its own, but totally different when it falls short and allies get a chance to call the shots. In the latter case, the BJP will have to convince alliance partners before going ahead with any decision, so the saffron party may rule but not with an ‘iron fist’. State-wise, the BJP will take a beating in Uttar Pradesh, which sends most MPs to the Lok Sabha, as the regional alliance of SP and BSP may get 53% vote share while the NDA may get 35 %. UP has 80 Lok Sabha seats out of which the BJP had won 71 seats in 2014. This was a decisive factor which propelled BJP to power. BJP’s vote share in UP in 2014

In Gujarat, BJP may get 54 percent votes, while the UPA is likely to get 42 percent votes. The others may get 4 percent. According to the survey, BJP’s vote share will decrease by 4 percent and the Congress is likely to gain 9 percent compared to 2014 general elections. Congress had secured 33 percent in 2014.

In 2014, the BJP won only 31.0% votes, which is the lowest share for a party to form a majority government in India since independence, while NDA’s combined vote share was 38.5%. BJP and its allies won the right to form the largest majority government since the 1984 general election, and it was the first time since that election that a party has won enough seats to govern without the support of other parties. The United Progressive Alliance, led by the Indian National Congress, won 59 seats, 44 of which were won by the Congress, that won 19.3% of all votes.