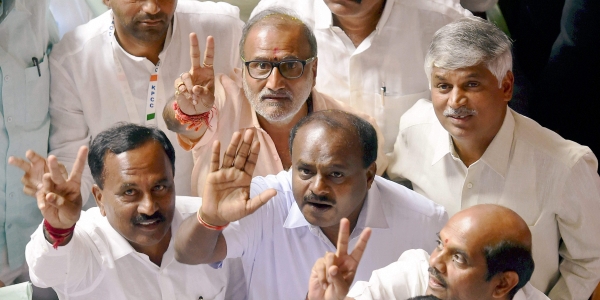 BENGALURU: The three-day-old Kumaraswamy government in Karnataka today won a vote of confidence without a contest, with the BJP MLAs walking out of the Assembly before the floor test, in an unexciting end to the 10-day high-voltage political drama after the polls yielded a hung House.

It turned out to be a smooth sailing for the 58-year- old H D Kumaraswamy, as BJP members trooped out of the House after Leader of the Opposition B S Yeddyurappa’s blistering attack on the “unholy” JD(S)-Congress coalition.

Kumaraswamy’s motion seeking the confidence vote was declared passed by voice vote by Speaker K R Ramesh Kumar in the absence of the BJP MLAs.

The first signs of the BJP conceding defeat in the numbers game were visible when it pulled out its candidate Suresh Kumar from the race for the Speaker’s post, saying it had decided to honour the parliamentary tradition that the presiding officer should be chosen unanimously.

The JD(S)-Congress coalition had claimed the support of 117 MLAs in the 224-member House with an effective strength of 221.

The alliance also claimed support of the lone KPJP MLA and an independent.

As Kumaraswamy had won from two constituencies, the 104-member BJP needed seven more MLAs to defeat the motion.

But like on May 19, when Yeddyurappa failed to muster support of as many lawmakers required to anchor his government’s ship safely, and stepped down, the BJP did not go for a showdown.

Seeking the trust vote, Kumaraswamy asserted the Congress-JD(S) coalition government would complete its five- year term, while maintaining he was conscious that his party JD(S) does not have a majority on its own.

“I am pained that people have not placed their trust in me,” he said, as he moved the motion seeking the vote of confidence of the Assembly in his government.

He, however, said the the coalition government will be “stable for five years”.

“We will work for the people. We are not here to fulfil our personal interests,” he said, adding neither he nor the members of his family ever hankered after power, and spent most of their time in politics seated in opposition benches.

The chief minister said there was a “blot” on JD(S) supremo and former prime minister H D Deve Gowda after he (Kumaraswamy) joined hands with the BJP to form a coalition government in 2006.

Kumaraswamy said he was now relieved as that “blot” on his father’s reputation caused by his act of aligning with the BJP has been removed (with the formation of a secular government).

Deve Gowda had strongly opposed Kumaraswamy’s decision to form a coalition government with the BJP.

He also said the government was committed to waiving farm loans, as promised during the elections.

Kumaraswamy accused the BJP-led government at the Centre of using its agencies like the Income Tax department and the Enforcement Directorate against its political rivals.

He alleged that “fake documents” had been created to claim he had floated a company in Malaysia and had “huge” properties there.

“An ED fellow asked me about it. I am ready to face any inquiry,” Kumaraswamy said, asserting he would not be cowed down by such bullying tactics.

Before staging a walkout, Yeddyurappa launched a stinging attack on Kumaraswamy, saying the chief minister was known for his acts of “betrayal”.

The BJP under Yeddyurappa had propped up the JD(S)-led government in 2006 as part of a power sharing arrangement of rotational chief ministership.

After Kumaraswamy had completed his 20-month term and Yeddyurappa’s turn came to become the chief minister, the JD(S) withdrew support in seven days.

Yeddyurappa told the Congress members that Kumaraswamy and Deve Gowda would “finish” their party.

“The father (Deve Gowda) and sons will finish the Congress,” Yeddyurappa said, adding he had no problem “if you want to be onboard the sinking ship of Kumaraswamy”.

Dubbing the JD(S)-Congress alliance as “unholy”, he said the two parties had defied the popular mandate which was in BJP’s favour.

“The JD(S) lost security deposit in 121 constituencies and did not win even a single seat in 16 districts,” he said, adding the coalition dispensation was a “government on daily wages”.

Today’s confidence vote was the second in less than a week, and on both occasions the BJP baulked at the prospect losing the numbers game and chose to avoid voting.

Yeddyurappa, who was sworn in as the chief minister on May 17, had stepped down two days later in the face of impending defeat without going through the motions of a floor test.

Kumaraswamy had taken oath on Wednesday in a grand ceremony where a galaxy of top leaders of anti-BJP national and regional parties were in attendance, in a rare show of unity ahead of the Lok Sabha polls next year.

The JD(S) leader’s real challenge will now be the expansion of his ministry, with leaders in the alliance already jockeying for Cabinet berths and plum portfolios.

The trust vote over, the MLAs of the ruling coalition, kept in a luxury hotel and a resort over fears of poaching by the BJP, would walk to freedom.